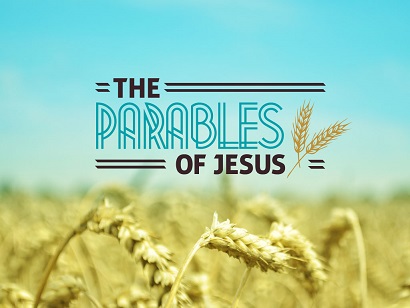 Matthew 13:3-And he spake many things unto them in parables..

Psalms 78:2 -I will open my mouth in a parable: I will utter dark sayings of old:

Colossians 2:3 -In whom are hid all the treasures of wisdom and knowledge.

2 Corinthians 4:4 -In whom the god of this world hath blinded the minds of them which believe not, lest the light of the glorious gospel of Christ, who is the image of God, should shine unto them.

John 18:37 -Pilate therefore said unto him, Art thou a king then? Jesus answered, Thou sayest that I am a king. To this end was I born, and for this cause came I into the world, that I should bear witness unto the truth. Every one that is of the truth heareth my voice.

John 17:17 -Sanctify them through thy truth: thy word is truth.

Galatians 5:16 -[This] I say then, Walk in the Spirit, and ye shall not fulfil the lust of the flesh.

John 15:5 -I am the vine, ye [are] the branches: He that abideth in me, and I in him, the same bringeth forth much fruit: for without me ye can do nothing.

Isaiah 7:14 -Therefore the Lord himself shall give you a sign; Behold, a virgin shall conceive, and bear a son, and shall call his name Immanuel.

Matthew 1:23 -Behold, a virgin shall be with child, and shall bring forth a son, and they shall call his name Emmanuel, which being interpreted is, God with us.

John 1:14 -And the Word was made flesh, and dwelt among us, (and we beheld his glory, the glory as of the only begotten of the Father,) full of grace and truth.

Philippians 2:5-9 -Let this mind be in you, which was also in Christ Jesus: Who, being in the form of God, thought it not robbery to be equal with God: But made himself of no reputation, and took upon him the form of a servant, and was made in the likeness of men: And being found in fashion as a man, he humbled himself, and became obedient unto death, even the death of the cross. Wherefore God also hath highly exalted him, and given him a name which is above every name:

Matthew 13:34-35 -All these things spake Jesus unto the multitude in parables; and without a parable spake he not unto them: That it might be fulfilled which was spoken by the prophet, saying, I will open my mouth in parables; I will utter things which have been kept secret from the foundation of the world.

Romans 1:20-25 -For the invisible things of him from the creation of the world are clearly seen, being understood by the things that are made, [even] his eternal power and Godhead; so that they are without excuse:  Because that, when they knew God, they glorified [him] not as God, neither were thankful; but became vain in their imaginations, and their foolish heart was darkened. Professing themselves to be wise, they became fools, And changed the glory of the uncorruptible God into an image made like to corruptible man, and to birds, and fourfooted beasts, and creeping things. Wherefore God also gave them up to uncleanness through the lusts of their own hearts, to dishonour their own bodies between themselves:  Who changed the truth of God into a lie, and worshipped and served the creature more than the Creator, who is blessed for ever. Amen.

John 3:19 -And this is the condemnation, that light is come into the world, and men loved darkness rather than light, because their deeds were evil.

Romans 5:8 -But God commendeth his love toward us, in that, while we were yet sinners, Christ died for us.

Matthew 6:28-29 -And why take ye thought for raiment? Consider the lilies of the field, how they grow; they toil not, neither do they spin: And yet I say unto you, That even Solomon in all his glory was not arrayed like one of these.

Ephesians 5:2 -And walk in love, as Christ also hath loved us, and hath given himself for us an offering and a sacrifice to God for a sweetsmelling savour.

Revelation 3:4; 19:8 -Thou hast a few names even in Sardis which have not defiled their garments; and they shall walk with me in white: for they are worthy…And to her was granted that she should be arrayed in fine linen, clean and white: for the fine linen is the righteousness of saints.

Hebrews 7:26 -For such an high priest became us, who is holy, harmless, undefiled, separate from sinners, and made higher than the heavens.

John 12:24 -Verily, verily, I say unto you, Except a corn of wheat fall into the ground and die, it abideth alone: but if it die, it bringeth forth much fruit.

John 15:8 -Herein is my Father glorified, that ye bear much fruit; so shall ye be my disciples

Philippians 2:6-8 -Who, being in the form of God, thought it not robbery to be equal with God: But made himself of no reputation, and took upon him the form of a servant, and was made in the likeness of men: And being found in fashion as a man, he humbled himself, and became obedient unto death, even the death of the cross.

Revelation 21:23; 22:5 -And the city had no need of the sun, neither of the moon, to shine in it: for the glory of God did lighten it, and the Lamb [is] the light thereof...And there shall be no night there; and they need no candle, neither light of the sun; for the Lord God giveth them light: and they shall reign for ever and ever.

Luke 7:36-50 -And one of the Pharisees desired him that he would eat with him. And he went into the Pharisee's house, and sat down to meat.  And, behold, a woman in the city, which was a sinner, when she knew that [Jesus] sat at meat in the Pharisee's house, brought an alabaster box of ointment, And stood at his feet behind [him] weeping, and began to wash his feet with tears, and did wipe [them] with the hairs of her head, and kissed his feet, and anointed [them] with the ointment.  Now when the Pharisee which had bidden him saw [it], he spake within himself, saying, This man, if he were a prophet, would have known who and what manner of woman [this is] that toucheth him: for she is a sinner. And Jesus answering said unto him, Simon, I have somewhat to say unto thee. And he saith, Master, say on. There was a certain creditor which had two debtors: the one owed five hundred pence, and the other fifty. And when they had nothing to pay, he frankly forgave them both. Tell me therefore, which of them will love him most? Simon answered and said, I suppose that [he], to whom he forgave most. And he said unto him, Thou hast rightly judged. And he turned to the woman, and said unto Simon, Seest thou this woman? I entered into thine house, thou gavest me no water for my feet: but she hath washed my feet with tears, and wiped [them] with the hairs of her head. Thou gavest me no kiss: but this woman since the time I came in hath not ceased to kiss my feet.  My head with oil thou didst not anoint: but this woman hath anointed my feet with ointment. Wherefore I say unto thee, Her sins, which are many, are forgiven; for she loved much: but to whom little is forgiven, [the same] loveth little. And he said unto her, Thy sins are forgiven. And they that sat at meat with him began to say within themselves, Who is this that forgiveth sins also? And he said to the woman, Thy faith hath saved thee; go in peace.

Hosea 14:1-8 -O Israel, return unto the LORD thy God; for thou hast fallen by thine iniquity. Take with you words, and turn to the LORD: say unto him, Take away all iniquity, and receive [us] graciously: so will we render the calves of our lips. Asshur shall not save us; we will not ride upon horses: neither will we say any more to the work of our hands, [Ye are] our gods: for in thee the fatherless findeth mercy. I will heal their backsliding, I will love them freely: for mine anger is turned away from him. I will be as the dew unto Israel: he shall grow as the lily, and cast forth his roots as Lebanon. His branches shall spread, and his beauty shall be as the olive tree, and his smell as Lebanon. They that dwell under his shadow shall return; they shall revive [as] the corn, and grow as the vine: the scent thereof [shall be] as the wine of Lebanon. Ephraim [shall say], What have I to do any more with idols? I have heard [him], and observed him: I [am] like a green fir tree. From me is thy fruit found.