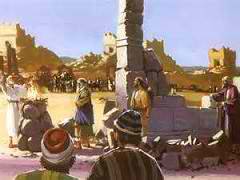 Genesis 41:45 And Pharaoh called Joseph's name Zaphnathpaaneah; and he gave him to wife Asenath the daughter of Potipherah priest of On. And Joseph went out over all the land of Egypt.  .

Genesis 48:18, "Joseph said unto his father, Not so, my father: for this [is] the firstborn; put thy right hand upon his head."

Hosea 4:17-19, "Ephraim is joined to idols: let him alone. Their drink is sour: they have committed whoredom continually: her rulers with shame do love, Give ye. The wind hath bound her up in her wings, and they shall be ashamed because of their sacrifices."

Tribe of Manasseh actively got invovled with reforms that took place during their time:

1. When King Asa destroyed the idols and renewed the worship of the Lord

2 Chronicles  15:9, " And he gathered all Judah and Benjamin, and the strangers with them out of Ephraim and Manasseh, and out of Simeon: for they fell to him out of Israel in abundance, when they saw that the LORD his God was with him."

2. And when Hezekiah held the great Passover feast, representatives from Manasseh humbled their hearts and partook of the Passover.

2 Chronicles 31:1, "Now when all this was finished, all Israel that were present went out to the cities of Judah, and brake the images in pieces, and cut down the groves, and threw down the high places and the altars out of all Judah and Benjamin, in Ephraim also and Manasseh, until they had utterly destroyed them all. Then all the children of Israel returned, every man to his possession, into their own cities."

3. During the time of Josiah's reign

2 Chronicles 34:1-6, "Josiah [was] eight years old when he began to reign, and he reigned in Jerusalem one and thirty years.  And he did that which was right in the sight of the LORD, and walked in the ways of David his father, and declined neither to the right hand, nor to the left.  For in the eighth year of his reign, while he was yet young, he began to seek after the God of David his father: and in the twelfth year he began to purge Judah and Jerusalem from the high places, and the groves, and the carved images, and the molten images.  And they brake down the altars of Baalim in his presence; and the images, that were on high above them, he cut down; and the groves, and the carved images, and the molten images, he brake in pieces, and made dust of them, and strowed it upon the graves of them that had sacrificed unto them.  And he burnt the bones of the priests upon their altars, and cleansed Judah and Jerusalem.  And so did he in the cities of Manasseh, and Ephraim, and Simeon, even unto Naphtali, with their mattocks round about."

2 Chronicles 34:9, "And when they came to Hilkiah the high priest, they delivered the money that was brought into the house of God, which the Levites that kept the doors had gathered of the hand of Manasseh and Ephraim, and of all the remnant of Israel, and of all Judah and Benjamin; and they returned to Jerusalem."

Noted character in the Tribe of Manasseh:

1. Faithful men who joined David at Ziklag when he was out to battle against Saul.

1 Chronicles 12:20-21, "As he went to Ziklag, there fell to him of Manasseh... And they helped David against the band of the rovers: for they were all mighty men of valour, and were captains in the host."

Judges 6:15, " And he said unto him, Oh my Lord, wherewith shall I save Israel? behold, my family [is] poor in Manasseh, and I am the least in my father's house."

Judges 6:16, "And the LORD said unto him, Surely I will be with thee, and thou shalt smite the Midianites as one man."

Revelation 3:11, "Behold, I come quickly: hold that fast which thou hast, that no man take thy crown."

Jeremiah 6:2, "I have likened the daughter of Zion to a comely and delicate woman."

Isaiah 51:16, "And I have put my words in thy mouth, and I have covered thee in the shadow of mine hand, that I may plant the heavens, and lay the foundations of the earth, and say unto Zion, Thou art my people."

2 Corinthians 11:2, "For I am jealous over you with godly jealousy: for I have espoused you to one husband, that I may present you as a chaste virgin to Christ."