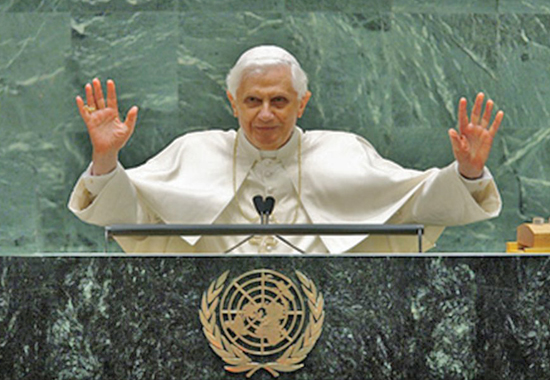 In today's world, you may have heard about the New World Order. What is the NWO? Most talk about how the elites of the world are controlling everything but fail to realize what the Word of God has to say about this. The Bible says that thereis a beast or a nation that would have the church and state united in the last days which would have control over the rest of the nations. This nation would be seeking to unite on a worldwide scale her church with the nations of the world or the United Nations. This whore of Babylon needs to unite with the nations of the world in order for her to carry out her last day purpose in deceiving the world into Satan's snares, Revelation 12:9. There is but one entity on this planet who has yoked their church with the state. Whatis this nation that has done what Christ said not to ever do (Matthew 22:21)? Rome! Rome has been for ages trying so hard to see global control. She is slowly gaining the ability to do this. After all, Rome is the seat of Satan, Revelation 2:13.Does the Vatican have plans in uniting the world under her authority as Scripture clearly says she would do? Yes!

Adaptive Model of the Global World System
"The Club [of Rome] had its beginnings in April of 1968, when leaders from ten different countries gathered in Rome...The organization claims to have the solutions for world peace and prosperity...The Club of Rome has been charged with the task of overseeing the regionalization and unification of the entire world...

"The Club's findings and recommendations are published from time to time in special, highly confidential reports, which are sent to the power-elite to be implemented. On 17 September 1973, the Club released one such report, entitled Regionalized and Adaptive Model of the Global World System... The document reveals that the Club has divided the world into ten political/ economic regions, which it refers to as 'kingdoms.'" 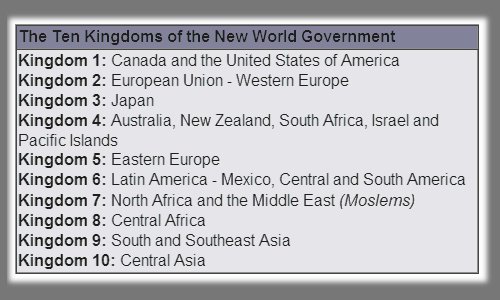 It is these ten kingdoms that are to give their power to Vatican City so that Satan can carry out his purpose in trying to force the world to worship him. He thinks that his plans will be victorious in defeating the Lamb of God in these last days, but these kingdoms will all be destroyed just as it says in Daniel.
Daniel 2:44-45, "And in the days of these kings shall the God of heaven set up a kingdom, which shall never be destroyed: and the kingdom shall not be left to other people, but it shall break in pieces and consume all these kingdoms, and it shall stand for ever. Forasmuch as thou sawest that the stone was cut out of the mountain without hands, and that it brake in pieces the iron, the brass, the clay, the silver, and the gold; the great God hath made known to the king what shall come to pass hereafter: and the dream is certain, and the interpretation thereof sure."

The Lord of Host is described as the stone, both in the Old Testament and the New Testament.
Daniel 2:45, "Forasmuch as thou sawest that the stone was cut out of the mountain without hands, and that it brake in pieces the iron, the brass, the clay, the silver, and the gold; the great God hath made known to the king what shall come to pass hereafter: and the dream is certain, and the interpretation thereof sure."
Acts 4:11, "This is the stone which was set at nought of you builders, which is become the head of the corner."
Ephesians 2:20, "And are built upon the foundation of the apostles and prophets, Jesus Christ himself being the chief corner stone;"
1 Corinthians 10, "...And did all drink the same spiritual drink: for they drank of that spiritual Rock that followed them: and that Rock was Christ. "
So it is that when the King of kings and Lord of lords returns, all eyes will see Him and will understand that His Word was true and faithful. Everything that was spoken had come to pass. Then all nations will fall and break to pieces as the Word has clearly stated.
Daniel 2:45, “… the dream is certain, and the interpretation thereof sure."