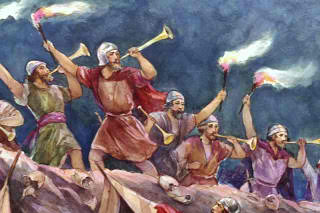 Jacob's words of blessings:
Genesis 49:14, “Issachar is a strong ass couching down between two burdens.”

Genesis 49:15, “And he saw that rest was good, and the land that it was pleasant; and bowed his shoulder to bear, and became a servant unto tribute.”

Titus 2:13, “Looking for that blessed hope, and the glorious appearing of the great God and our Saviour Jesus Christ.”

Revelation 21:4, "And God shall wipe away all tears from their eyes; and there shall be no more death, neither sorrow, nor crying, neither shall there be any more pain: for the former things are passed away."

Judges  5:15,  “And the princes of Issachar were with Deborah; even Issachar, and also Barak.”

1 Chronicles  12:32, “And of the children of Issachar, which were men that had understanding of the times, to know what Israel ought to do.”

Noted character in the Tribe of Issachar:
1. Barak and Deborah -
2. Woman in Shunem - who helped Elisha. She built an extra room and furnished it for him.

Some of the kings of Israel were from the tribe of Issachar:
1. Tola - defended Israel and reigned 23 years - Judges  10:1-2, "And after Abimelech there arose to defend Israel Tola the son of Puah the son of Dodo, a man of Issachar, and he dwelt in Shamir in mount Ephraim.   And he judged Israel twenty and three years, and died, and was buried in Shamir.

1 Kings 15:34, "And he did evil in the sight of the LORD, and walked in the way of Jeroboam, and in his sin wherewith he made Israel to sin."

Unforgettable event of history that happened in the land where Issachar dwelt:
1. Saul consulting to the witch in Endor - 1 Samuel 28:7-25

1 Chronicles  10:13-14, “So Saul died for his transgression which he committed against the LORD, even against the word of the LORD, which he kept not, and also for asking counsel of one that had a familiar spirit, to inquire of it; And inquired not of the LORD: therefore he slew him, and turned the kingdom unto David the son of Jesse.”

Romans 7:12, "Wherefore the law is holy, and the commandment holy, and just, and good.”