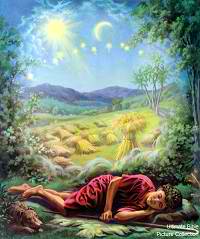 Joseph- 11th Son of Jacob, the first-born of Rachel

Genesis 30:22-25, "And God remembered Rachel, and God hearkened to her, and opened her womb.  And she conceived, and bare a son; and said, God hath taken away my reproach:  And she called his name Joseph; and said, The LORD shall add to me another son."

Jacob's prophetic words to Joseph:
Genesis 49:26, "The blessings of thy father have prevailed above the blessings of my progenitors unto the utmost bound of the everlasting hills: they shall be on the head of Joseph, and on the crown of the head of him that was separate from his brethren."

Genesis 37:2, "These are the generations of Jacob. Joseph, being seventeen years old, was feeding the flock with his brethren; and the lad was with the sons of Bilhah, and with the sons of Zilpah, his father's wives: and Joseph brought unto his father their evil report."

Major points of Joseph's life:
1. Coat of many colors -
Genesis 37:3,  "Now Israel loved Joseph more than all his children, because he was the son of his old age: and he made him a coat of many colours."

Genesis 37:4, "And when his brethren saw that their father loved him more than all his brethren, they hated him, and could not speak peaceably unto him."

2. Joseph's dream
Genesis 37:5, "And Joseph dreamed a dream, and he told it his brethren: and they hated him yet the more."

The dream:
Genesis 37:7, "For, behold, we were binding sheaves in the field, and, lo, my sheaf arose, and also stood upright; and, behold, your sheaves stood round about, and made obeisance to my sheaf."

Genesis 42:6, "And Joseph was the governor over the land, and he it was that sold to all the people of the land: and Joseph's brethren came, and bowed down themselves before him with their faces to the earth."

3. Sold to Egypt
Genesis 45:8, "So now it was not you that sent me hither, but God: and he hath made me a father to Pharaoh, and lord of all his house, and a ruler throughout all the land of Egypt."

Genesis 50:20 But as for you, ye thought evil against me; but God meant it unto good, to bring to pass, as it is this day, to save much people alive.

Genesis 49:24, "But his bowabode in strength, and the arms of his hands were made strong by the hands of the mighty God of Jacob; from thence is the shepherd, the stone of Israel:"

Malachi 3:3, "And he shall sit as a refiner and purifier of silver: and he shall purify the sons of Levi, and purge them as gold and silver, that they may offer unto the LORD an offering in righteousness."

Job 1:21, "And said, Naked came I out of my mother's womb, and naked shall I return thither: the LORD gave, and the LORD hath taken away; blessed be the name of the LORD."

One of Joseph's greatest temptations:
Genesis 39:6, "...And Joseph was a goodly person, and well favoured."

Genesis  39:7, "And it came to pass after these things, that his master's wife cast her eyes upon Joseph; and she said, Lie with me."

Joseph's answer to the tempter:
Genesis  39:9, "...how then can I do this great wickedness, and sin against God?"

Genesis 41:46, "And Joseph was thirty years old when he stood before Pharaoh king of Egypt."

Genesis 41:43, "And he made him to ride in the second chariot which he had; and they cried before him, Bow the knee: and he made him ruler over all the land of Egypt."

Joseph illustrates the life of Christ:

Matthew 25:23, "Well done, good and faithful servant; thou hast been faithful over a few things, I will make thee ruler over many things: enter thou into the joy of thy lord."