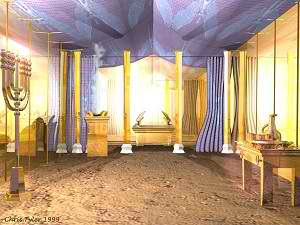 Genesis 3:24, "So he drove out the man; and he placed at the east of the garden of Eden Cherubims, and a flaming sword which turned every way, to keep the way of the tree of life."

The first offering ever recorded in the Bible:
Genesis 4:4, "And Abel, he also brought of the firstlings of his flock and of the fat thereof. And the LORD had respect unto Abel and to his offering."

Hebrews 11:4, "By faith Abel offered unto God a more excellent sacrifice than Cain, by which he obtained witness that he was righteous, God testifying of his gifts: and by it he being dead yet speaketh."

Abraham was called to offer his son, Isaac:
Genesis  22:2, "And he said, Take now thy son, thine only son Isaac, whom thou lovest, and get thee into the land of Moriah; and offer him there for a burnt offering upon one of the mountains which I will tell thee of."

Hebrews 11:17-19, "By faith Abraham, when he was tried, offered up Isaac: and he that had received the promises offered up his only begotten son. Of whom it was said, That in Isaac shall thy seed be called:  Accounting that God was able to raise him up, even from the dead; from whence also he received him in a figure."

James 2:23, "And the scripture was fulfilled which saith, Abraham believed God, and it was imputed unto him for righteousness: and he was called the Friend of God."

2 Samuel 5:7, "Nevertheless David took the strong hold of Zion: the same is the city of David."

2 Chronicles  3:1, "Then Solomon began to build the house of the LORD at Jerusalem in mount Moriah, where the Lord appeared unto David his father, in the place that David had prepared in the threshingfloor of Ornan the Jebusite."

Matthew 27:51, "And, behold, the veil of the temple was rent in twain from the top to the bottom; and the earth did quake, and the rocks rent."

Zechariah 14:4, "And his feet shall stand in that day upon the mount of Olives, which is before Jerusalem on the east."

Ezekiel  37:26, "Moreover I will make a covenant of peace with them; it shall be an everlasting covenant with them: and I will place them, and multiply them, and will set my sanctuary in the midst of them for evermore."

The first command to build the earthly sanctuary:
Exodus 25:8, "And let them make me a sanctuary; that I may dwell among them."

Brief history of how the sanctuary was set up after they entered Canaan:
1. Gilgal - the sanctuary was set up in Gilgal for few years (Joshua 5:10,11)
2. Shiloh - moved to Shiloh (Joshua 18:1) and remained there for many years
3. Nob - during the time when David was fleeing from Saul (1 Samuel 21:1-6)
4. Gibeon - (1 Chronicles 16:36; 21:29) The tabernacle remained here until Solomon removed it to Jerusalem
5. Jerusalem - this was when solomon built the temple

1 Chronicles  28:19, "All this, said David, the LORD made me understand in writing by his hand upon me, even all the works of this pattern."

3. Robbed by Jehoash -
2 Kings 12:17-18, "Then Hazael king of Syria went up, and fought against Gath, and took it: and Hazael set his face to go up to Jerusalem. And Jehoash king of Judah took all the hallowed things that Jehoshaphat, and Jehoram, and Ahaziah, his fathers, kings of Judah, had dedicated, and his own hallowed things, and all the gold that was found in the treasures of the house of the LORD, and in the king's house, and sent it to Hazael king of Syria: and he went away from Jerusalem."

7. Polluted by Manasseh-
2 Kings 21:4-7, "And when thou art come in, thou shalt shut the door upon thee and upon thy sons, and shalt pour out into all those vessels, and thou shalt set aside that which is full. So she went from him, and shut the door upon her and upon her sons, who brought [the vessels] to her; and she poured out. And it came to pass, when the vessels were full, that she said unto her son, Bring me yet a vessel. And he said unto her, [There is] not a vessel more. And the oil stayed.Then she came and told the man of God. And he said, Go, sell the oil, and pay thy debt, and live thou and thy children of the rest."

2 Kings 21:1, "Manasseh was twelve years old when he began to reign, and reigned fifty and five years in Jerusalem. And his mother's name was Hephzibah."

9. Destroyed and Burnt by Babylonians-
2 Kings  25:8-9, "And in the fifth month, on the seventh [day] of the month, which is the nineteenth year of king Nebuchadnezzar king of Babylon, came Nebuzaradan (Neb-u-za-ray-don), captain of the guard, a servant of the king of Babylon, unto Jerusalem. And he burnt the house of the LORD, and the king's house, and all the houses of Jerusalem, and every great man's house burnt he with fire."

11. Repaired by Herod -
John 2:20, "Then said the Jews, Forty and six years was this temple in building, and wilt thou rear it up in three days?"

1 John 2:6, "He that saith he abideth in him ought himself also so to walk, even as he walked."

Matthew  27:50-51, "Jesus, when he had cried again with a loud voice, yielded up the ghost.  And, behold, the veil of the temple was rent in twain from the top to the bottom; and the earth did quake, and the rocks rent;"

2 Corinthians 3:13-15, "And not as Moses, which put a veil over his face, that the children of Israel could not stedfastly look to the end of that which is abolished: But their minds were blinded: for until this day remaineth the same veil untaken away in the reading of the old testament; which veil is done away in Christ. But even unto this day, when Moses is read, the veil is upon their heart."

Colossians 2:14, "Blotting out the handwriting of ordinances that was against us, which was contrary to us, and took it out of the way, nailing it to his cross;"

Ephesians 2:15, "Having abolished in his flesh the enmity, even the law of commandments contained in ordinances; for to make in himself of twain one new man, so making peace;"

Acts 13:46, "Then Paul and Barnabas waxed bold, and said, It was necessary that the word of God should first have been spoken to you: but seeing ye put it from you, and judge yourselves unworthy of everlasting life, lo, we turn to the Gentiles."

Revelation 21:13-15, "And I heard a great voice out of heaven saying, Behold, the tabernacle of God is with men, and he will dwell with them, and they shall be his people, and God himself shall be with them, and be their God. And God shall wipe away all tears from their eyes; and there shall be no more death, neither sorrow, nor crying, neither shall there be any more pain: for the former things are passed away. And he that sat upon the throne said, Behold, I make all things new."

Psalm 116:12-14, "What shall I render unto the LORD for all his benefits toward me? I will take the cup of salvation, and call upon the name of the LORD. I will pay my vows unto the LORD now in the presence of all his people."

Revelation 22:21, "The grace of our Lord Jesus Christ be with you all. Amen."